Get assistance in applying for federal educational benefits

The University of Saint Joseph is approved for the training of military personnel, veterans, and children of veterans under the appropriate chapter of Title 38, the United States code. To apply for educational benefits please contact the VA at 888-GIBILL-1 (888.442.4551). Or, visit their website.

GI Bill® is a registered trademark of the U.S. Department of Veterans Affairs (VA). More information about education benefits offered by the VA is available at the official U.S. government website at https://www.benefits.va.gov/gibill.

The University will not charge VA students (Chapter 33 and 31) a late fee while awaiting tuition and fee funds from VA. The school may apply fees to VA students with eligibility less than 100%, prorated to the percentage of charges not covered by VA benefits.

Do you have questions about veteran benefits at USJ? If so, please contact [email protected] and a member of our staff will get back to you.

The University of Saint Joseph (USJ) recognized the generous service of all veterans, with a Thank You video and private awards ceremony, where the recipients of the Colonel B. Catherine Noble* and Rear Admiral Frances T. Shea Buckley** Awards were honored. 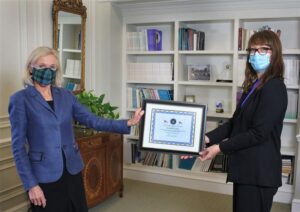 This year, USJ honored Elizabeth Strout ’21 with the Frances Shea Buckley Award. Strout was in the CT Army National Guard from 1999-2005 and served full-time in the Department of Defense Blackhawk Helicopter Mechanic and Crewmen leaving as a Sergeant. During the private ceremony with President Rhona Free, Strout said, “I am really honored, humbled, and thankful for the award.” 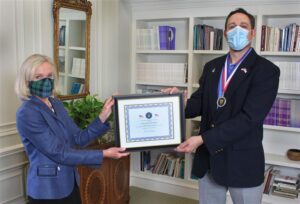 USJ CIO Jason M. Lawrence, MBA, was awarded the Colonel B. Catherine Noble Award. Lawrence was in the U.S. Coast Guard from 1990 – 2014 in information technology services and ultimately became an E-8 Senior Chief Petty Officer. Upon receiving this award from President Rhona Free, Lawrence said, “I don’t normally look to promote myself, I look for other Veterans to promote as they are just as worthy. I thank everyone for their Veterans Day wishes and recognition of our service.”

USJ thanks these brave individuals for their service!

Watch the USJ Thank You to Veterans video here.

*The Colonel B. Catherine Noble Award is named for the University of Saint Joseph alumna who earned her Bachelor of Science degree in Nutrition in 1947. Throughout her 28-year military career, Noble served in numerous dietician positions around the globe. At the time of her retirement in 1979, Noble – who received a Distinguished Alumni Award from USJ in 1975 – was among the highest-ranking African American female officers in Army history and the first African American woman to hold the rank of Colonel in the Army Medical Specialist Corps.

**The second award was named for Rear Admiral Frances T. Shea Buckley ’50, DAA’79, H’10, who earned a Bachelor of Science degree in Nursing from the University of Saint Joseph in 1950. Joining the Navy at the outbreak of the Korean War, Buckley served our country in numerous positions, including Director of Nursing Services at the National Naval Medical Center in Bethesda, Maryland, and Director of the Navy Nurse Corps in 1979. By assuming this final assignment, Buckley was promoted to Rear Admiral and, as a result, was the only active-duty female Rear Admiral and one of the highest-ranking women in Navy history.

Take the Next Step

Come and tour our beautiful campus, learn more about our programs and discover firsthand what makes our University so unique!