If the video does not load after 7 p.m. please refresh the page and press play.

Use the Chat window below the video to make comments and ask questions. 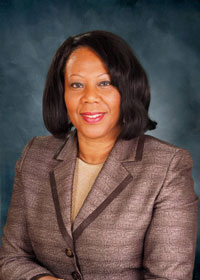 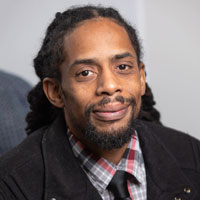 Dr. Pablo Correa is the Program Director and Assistant Professor of the Digital Media and Communication program at the University of Saint Joseph in West Hartford, Connecticut. Previously, Correa was a visiting professor in the Civic Communication and Media department at Willamette University in Salem, Oregon. Correa specializes in digital media and documentary film with a special focus on the interests of minorities, especially Blacks and Hispanics in America. His work highlights racial relations, stories of tension, as well as stories of perseverance and success.

As a graduate student at Florida State University, Correa received the Bronze Award in the 2015 Fort Lauderdale International Film Festival (college documentary category) out of more than 350 documentaries. His documentary highlighted the civil rights movement in Ft. Lauderdale, Florida. His film on the civil rights movement in Tallahassee, Florida, was screened during the 2017 Southern Margins Film Festival at Clemson University.

Currently, Correa works on projects commemorating Emmett Till and documenting the racial reconciliation movement in the Mississippi Delta. He has filmed a series of short videos for the Emmett Till Interpretive Center and served as the photographer for the Emmett Till Memory Project, an app now available in Android and Apple app stores.

Correa is currently working on the Fannie Lou Hamer’s America team as assistant videographer for the film, web designer, and co-instructor for the Young Filmmaker’s Workshop which instructs and empowers Mississippi delta high school students to tell their own stories through digital media.

Correa is from Fort Lauderdale, Florida, and hopes to teach and inspire others through documentary film. 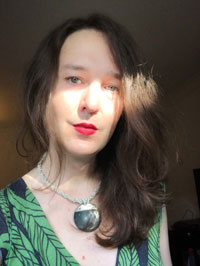 Joy Elaine Davenport is a documentary filmmaker who specializes in lyrical, intimate stories that have been neglected or forgotten. She has produced films on an eclectic range of topics, from the painters who work to capture a vanishing Everglades, to the secret Communist influences of Gilligan’s Island, to the unsung heroes of the struggle for racial justice, and more. Her work has appeared on PBS, NBC, National Geographic, and Sundance Film Festival. She is currently based out of Chicago, Illinois. 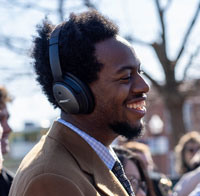 Justin Farmer is a 25-year-old activist elected official. He is currently serving his second term as a Legislative Councilman representing Hamden’s 5th District. Justin’s experience as a seasoned community organizer has enabled him to build some of the strongest grassroots campaigns in state history.

Founder of Voices of Women of Color 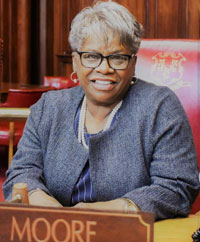 Marilyn Moore is a lifelong Bridgeport resident. She is mother to three; Michelle Bradshaw-Ellis, Felisha Bradshaw, and James Bradshaw, Jr., and grandmother to nine, Marilyn attended Bridgeport public schools, Housatonic Community College and the University of Bridgeport.  A disciple of Mount Aery Baptist Church she declares that God has blessed her abundantly and all the glory and honor belong to Him.

Marilyn credits her years at AT&T as laying the foundation for her future in the corporate, non-profit and political arena. After retiring from AT&T, Marilyn shifted from the corporate to human services in the non-profit sector when she joined Planned Parenthood as an outreach worker to educate women about breast cancer and early detection.  She launched a nonprofit expanding the work she did at PPPC and became an advocate for women’s health and joined the breast cancer crusade to build awareness and support survivors.  In 2002, Marilyn founded the Witness Project of Connecticut, which serves to address and reduce the incidence and death rates of breast cancer among low income and African American women.  With the assistance of dedicated staff and board members over 1,500 women were reached annually in the battle against breast cancer. This year she received Planned Parenthood of Southern New England’s first Voice and Vision Award for her leadership in advocating for health equity, advancing reproductive freedom for Connecticut Women and families. She is most proud of this award because it is where she began her work more than 20 years ago addressing health equity for women.

She is nationally known for her advocacy on behalf of breast cancer and is an active participant in the war against hunger, social justice, and racial equity.  To further improve health outcomes, she has become an advocate to combat chronic diseases through nutrition and implemented Body & Soul in several Bridgeport churches.  Marilyn stays connected to information and advocacy groups by actively participating in projects whose mission address food access and is a member of the Network Support Team for the Connecticut Food Systems Alliance and is the Connecticut Ambassador on the Food Solutions New England Coalition who seeks to build regional solutions to food sustainability within the New England States.  Locally, Marilyn organized coalitions in Bridgeport to address food equity and as a result the City of Bridgeport formed a Food Policy Council.

She is also a State Director for Women Legislators’ Lobby (WiLL) equips women state legislators to maximize their success in their states.  Marilyn has been involved in local politics since she worked on the campaign for Tisdale for Mayor and has coordinated several successful campaigns.  In 2013, Marilyn challenged a six-year incumbent for a State Senate seat and was successful in her bid to represent Trumbull, Bridgeport, and Monroe. She was sworn in on January 7, 2015 and is currently Chair of Human Services, General Bonding, and Vice-Chair of Finance, Revenue and Bonding, and is a member of Children; Executive & Legislative Nominations; Legislative Management and Public Health. Her commitments to her constituents are to address health equity, living wage and promote legislation that supports safe communities and protects the rights of all. During campaigns she seeks refuge in Psalms 27 and believes it is the pathway to Psalms 30.