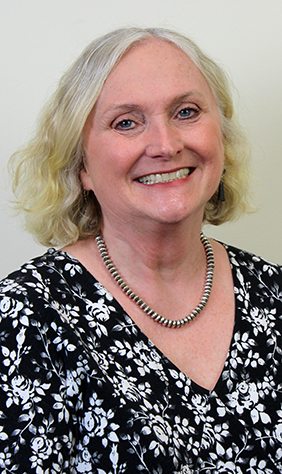 Whether the subject is Mark Twain, Walt Whitman, or Sherman Alexie, Dr. Kerry Driscoll is passionate about the teaching of literature.  “There is no frigate like a book,” she says, quoting Emily Dickinson, “to take us worlds away.” As readers immerse themselves in the diverse imaginative worlds of literary texts, a dynamic, transformative process begins, during which, Dr. Driscoll asserts, they learn not only about plot, character, and themes, but also about themselves. Her teaching philosophy is best expressed by a line from William Carlos Williams’s poem, “To Daphne and Virginia”: “A new world is a new mind.” She believes that “new worlds” and new paradigms of thought can be readily discovered in an academic classroom, but only if certain conditions exist. “As a teacher, I regard it as my first and foremost responsibility to create those conditions-specifically, an environment that is at once vibrant, inclusive, and charged with the electricity of intellectual challenge. I want the students to take risks and relinquish long-held attitudes and preconceptions.”

Dr. Driscoll, who has also taught at Ithaca and Elmira Colleges, says that her most challenging teaching assignment was as a Fulbright Professor at Germany’s University of Heidelberg, founded in 1386.  “Teaching regional vernacular, captivity narratives and  the work of contemporary American poets like Allen Ginsberg and Robert Creeley to non-native speakers of English caused me to approach long-familiar texts in a cross-cultural context. In seeking to clarify these works and make them accessible for my German students, to my great delight, I myself discovered them anew, and learned what made each of them distinctly and uniquely ‘American.'”

In May 2011, Dr. Driscoll was awarded the Reverend John J. Stack Teaching Excellence Award. She had been nominated by students and staff. One colleague, a former student, wrote: “At times, I bemoaned the high expectations that Dr. Driscoll had for me but in retrospect, I realize that she expected much of me because she believed in me and wanted me to do the same. Because of her encouragement, I developed high expectations for myself, without which I’m not sure I would have had the courage to apply to graduate school, to finish my Ph.D., or even to return to USJ to teach. And now, a professor myself, I model myself after Dr. Kerry Driscoll: teaching not to students’ abilities, but beyond their abilities.”Recent Research/Publications/Presentations