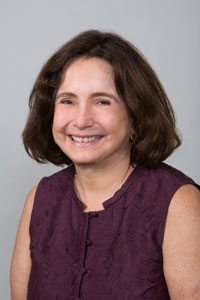 Mary Alice Wolf found her special calling at Elderhostel, where she was studying what she describes as “older learners.”  She said, “I was drawn immediately to the population and made this topic the bedrock of my academic career as a gerontologist.”

At University of Saint Joseph, she sees the opportunity to work with her students and colleagues to shape this exciting field. She said, “I am particularly proud of the graduates of the gerontology programs who have contributed so much to the environments affecting the aged.”

Dr. Wolf’s interest in how people learn has also shaped her work with students. “I believe that all learning is developmental, ” Dr. Wolf explained. “Students need to absorb academic content at the level of their understanding.  They then begin to see the world (and their place in it) in a newly differentiated way.  They then can participate in creating knowledge and in life-long learning.  The key is to believe in the potential of the learner.”

She began teaching at the University in 1983. ” I bring awe for our learners and pride in being able to help them accomplish their goals,” she said of her students. “I have the highest standards for academic accomplishment and high expectations.”

As for her professional achievements, she said, “I am especially proud to be a Fellow of both the Gerontological Society of America and the Association for Gerontology in Higher Education.  Also, at University of Saint Joseph, we founded the Consortium for Gerontological Education, a successful regional outreach organization.”