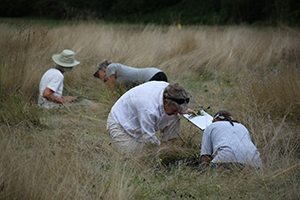 The day proved successful, with the volunteers from Master Gardener collecting roughly 32 distinct samples. While they will continue classifying the selection, the group identified approximately 13 species while on campus.

Since Martin’s baseline survey last fall, which resulted in around nine species of vegetation, she noted an improvement in the Grassland area’s biodiversity. The insect diversity improved as well, seen through the group’s capture of at least five species of spiders on the specimens and six species of dragonflies in the area.

Martin plans to continue work in the Grassland by bringing the Master Gardeners back to campus in the fall to explore further.